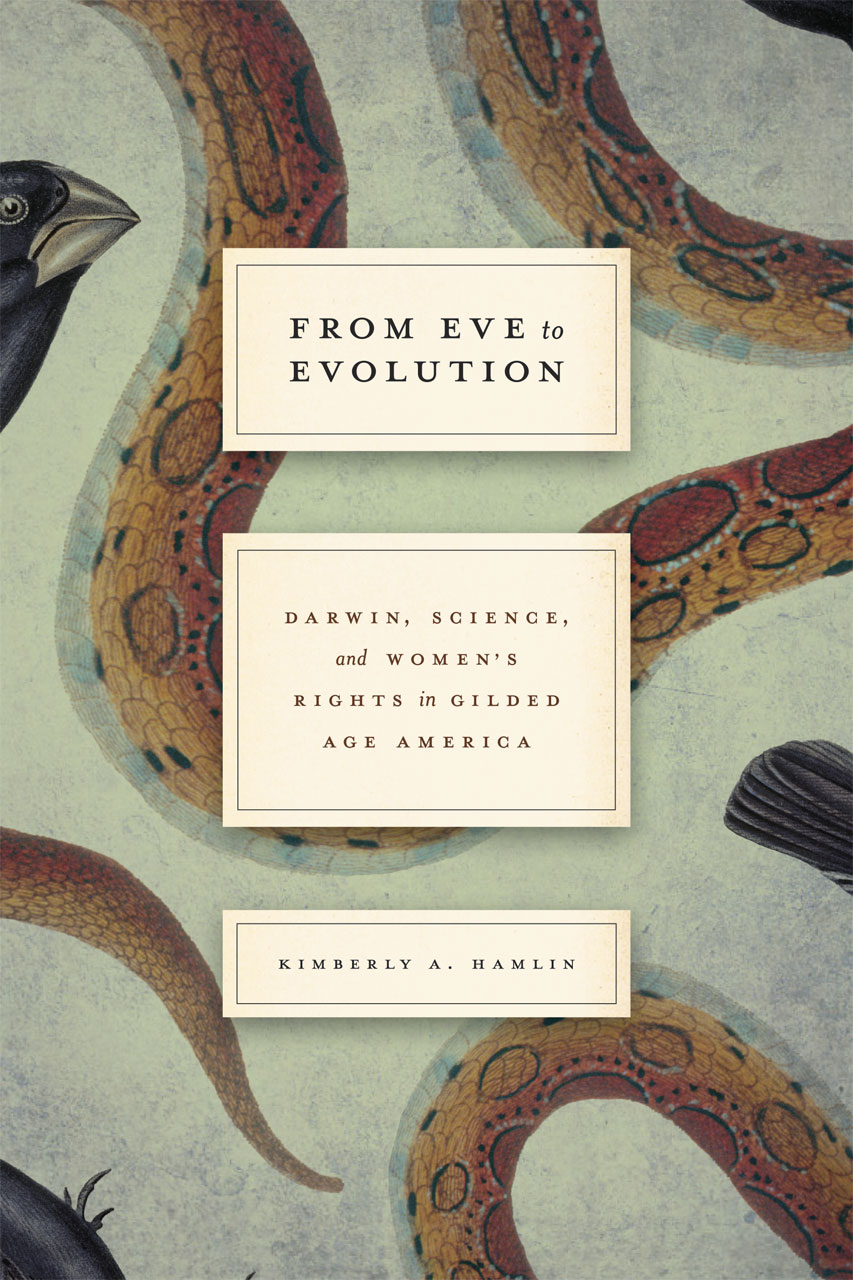 From Eve to Evolution: Darwin, Science and Women’s Rights in Gilded Age America (University of Chicago Press 2014) provides the first full-length study of American women’s responses to evolutionary theory and illuminates the role science played in the nineteenth-century women’s rights movement. Hamlin reveals how a number of nineteenth-century women, raised on the idea that Eve’s sin forever fixed women’s subordinate status, embraced Darwinian evolution—especially sexual selection theory as explained in The Descent of Man—as an alternative to the creation story in Genesis. These Darwinian feminists demanded women’s right to work outside the home, the equitable division of domestic labor, and women’s reproductive autonomy. From Eve to Evolution also provides an important pre-history of feminist science and disrupts long-held ideas about the “natural” differences between women and men.

“Hamlin has made excellent work of giving context and meaning to the biological turn of Gilded Age American feminism. She offers a scholarly and convincing resolution of the long-standing historical puzzle of the appeal of an evolutionary-based “different but equal” thesis to feminists of this particular time and place.”
—EVELLEEN RICHARDS, ISIS, DECEMBER 2015, 956-957

“In this powerful and invigorating book, Hamlin presents some of the best-known and lesser-known female intellectuals from this fascinating age.  One crucial and significant aspect of her work is how feminists such as Eliza Burt Gamble applied the then-acceptable framework of Darwinism to the advancement and justification of feminism, which effectively challenged the validity of Gilded Age Darwinian beliefs.”
–T. MAXWELL-LONG, CHOICE MAGAZINE, SEPTEMBER 2015

“While Charles Darwin is not widely associated with feminism, Kimberly A. Hamlin argues convincingly that his work was foundational to the American women’s movement of the late nineteenth century….Hamlin’s book is lively with the intellectual debates of the moment when Darwin’s ideas merged with the women’s rights movement. It would work well on a syllabus alongside Rebecca M. Jordan-Young’s Brain Storm (2010), serving to remind us that constructions of gender, sex, and science are both continually in flux and in conversation with each other.”
—MEGAN ELIAS, JOURNAL OF AMERICAN HISTORY, JUNE 2015

“The most comprehensive account so far of how nineteenth-century US men and women appropriated Darwinian ideas to argue for the equality of the sexes in the domestic and public spheres. . . . This deeply researched and richly detailed picture of US feminism in the late nineteenth century and early twentieth century is an important contribution to our understanding of the interrelation of gender politics and science. From Eve to Evolution firmly corrects the mistaken view that evolutionary biology and feminism are at odds. And it reveals a more diverse dialogue around the science of sexual equality in the era than is generally appreciated.”
–SARAH S. RICHARDSON, NATURE, MAY 22, 2014

“The reader might suppose that this is a tale of how the myths of Christianity at first impeded improvements in the status of women, but were then driven back by the rational truths of science, which propelled women forward toward full citizenship.But the story is much more complicated than that, and those complications are what make this book so fascinating.”
—EMILY GROSHOLZ, WOMEN’S REVIEW OF BOOKS VOL. 32, NO. 1, JAN/FEB 2015

“From Eve to Evolution documents the ardent ways in which women’s rights advocates articulated and advanced Charles Darwin’s observations of female choice in the natural world as a counterargument to age-old biblical assertions about women’s roles in society. Original and synthetic, Hamlin’s analysis follows key activists—some radical and others well established in society—to demonstrate their careful attention to the science involved as they made their case. She provides a fresh intellectual history of late nineteenth-century feminism that will interest historians of science as well as those interested in women, gender, and science issues.”
—SALLY GREGORY KOHLSTEDT, EDITOR OF HISTORY OF WOMEN IN THE SCIENCES

“From Eve to Evolution offers a lucid account of Darwin’s theories and their reception in America, focusing particularly on elements critical to women of the late nineteenth and early twentieth centuries—the conflict between work and motherhood, women’s individuation, and sexual selection. The book restores figures, important in their own day but lost to historical consideration, such as Helen Hamilton Gardener and Eliza Burt Gamble, and presents lesser-known aspects of better-known figures, such as Antoinette Brown Blackwell. The work offers an important reminder of the role that science increasingly played in American culture and the baneful effects of the silencing of women’s voices from scientific discussion and debate.”
—HELEN LEFKOWITZ HOROWITZ, AUTHOR OF WILD UNREST

“The title of this book, From Eve to Evolution, neatly summarizes Hamlin’s narrative: how a relatively small but influential group of American feminists embraced the natural evolution of humans as a weapon to challenge the biblical—and notoriously patriarchal—account of God’s creation of Adam and Eve in the Garden of Eden. The fact that historians have struggled for decades to identify women’s voices in the debates over Darwinism, both pro and con, makes this volume especially valuable.”
—RONALD L. NUMBERS, UNIVERSITY OF WISCONSIN-MADISON

“Historians of American feminism are frequently stymied by the transition from an emphasis on equality of men and women to sex differences. Hamlin has provided the most convincing explanation yet for this shift….Hamlin’s book is also full of original insights into well-known figures in women’s history – Charlotte Perkins Gilman, Margaret Sanger and Cady Stanton – even as it reintroduces long-forgotten contributors. …From Eve to Evolution is a contribution to both the history of American feminism and the history of women and science, as well as an excellent read. “
—ELLEN CAROL DUBOIS, TIMES HIGHER ED, AUGUST 28, 2014

“In [Hamlin’s] deft and elegant account of American intellectual women’s responses to evolution and its interpreters, she establishes the Darwinian legacy to be—at least with regard to discourses of sex difference, sexual selection, and reproductive outcomes—more multifaceted than Darwin’s own utterances and beliefs predicted.”
—JUDITH ALLEN, REVIEW IN THE JOURNAL OF THE GILDED AGE AND PROGRESSIVE ERA, VOL. 14, APRIL 2015, 267-269.

“From Eve to Evolution tells the story of early feminists and evolutionary theory with great clarity and verve, extolling the accomplishments of these generations of women without ever resorting to hagiography…. This is a truly enlightening book, sure to serve for years to come as a model for the exploration of how science and culture interact.”
—GUY LANCASTER, REVIEW IN AMERICAN STUDIES, VOL. 54, MARCH 2015, 157-159.

“The most useful aspect of this book is that it can be included in not only women’s studies courses but, most importantly, in those courses that examine the intellectual, cultural, and economic dimensions of Darwinism in America during the latter half of the 19th and into the 20th centuries.”
—DAWN DIGRIUS, REVIEW IN THE QUARTERLY REVIEW OF BIOLOGY, VOL. 90, MARCH 2015, 71-72.